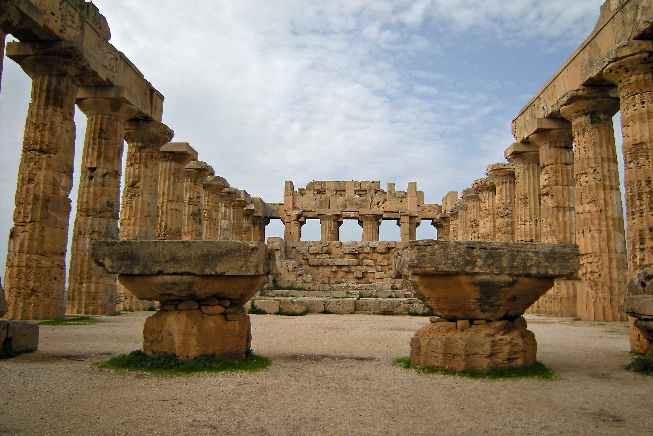 Sicily is the largest island in the Mediterranean and much bigger than most people realise. The Mafia and Inspector Montalbano spring to mind and whilst you’re unlikely to spot either of these, a visit to Sicily is rewarded with stunning architecture and traditions from 2,500 years of mixed Spanish, Roman, Greek, African and Italian occupation. If you’re expecting something much the same as Italy you’ll be disappointed, if you’re looking for surprises Sicily will deliver

Our tour covers the whole island and throughout you’re never far from the sea. We stay in the islands two major cities, capital Palermo and second city Catania; see the geographical phenomenon of Mount Etna, Europe’s most active volcano; the nature of San Vito lo Capo peninsular, the ancient monuments at the Valley of Temples and Salinunte, the wonderful architecture in Syracuse and Cefalù, the UNESCO towns of Noto and Taormina and the amazing mosaics of Villa Romana.

Roy & Kath Tipping – Sicily 2018
‘This tour was a real eye-opener to travellers who thought they knew Italy. Very different culture from the mainland with really good local food and wine. Many superb historical sites. Tour Directors were excellent leaders with a very good knowledge of the island. A thoroughly good tour from beginning to end.’

Day One – Tuesday 15th September
We meet at a good quality campsite near to Rome in Italy. This evening we get together at the Tour Directors motorhome for welcome drinks, a tour briefing and opportunity to meet fellow travellers.

Day Two – Wednesday 16th September
A leisurely start to today before we make our way south to the port of Salerno for our evening departure and overnight ferry crossing to Sicily. (En-suite inside cabins are included for you) 180 miles

Day Three – Thursday 17th September
Arriving in Sicily this morning it’s just a short drive to our first Sicilian campsite, complete with sea views, in the city of Catania. This evening we celebrate our arrival with a dinner of local Sicilian food & wine in the campsites own restaurant. 15 miles

Day Four – Friday 18th September
A free day. Located in the shadow of Mount Etna Catania, the island’s second largest city, has been reshaped many times. Over the years following violent eruptions from its near neighbour, the city has been rebuilt seven times and the locals’ response has always been to build using material that comes in abundance following volcanic activity – lava. This makes for an unusual and interesting architecture style and from our campsite there are easy public transport links to the city centre.

Day Five – Saturday 19th September
We have a guided excursion to Taormina and Mount Etna today. The beautiful town of Taormina is one of Sicily’s most famous resorts. Perched on a rocky promontory overlooking the sea with dramatic views of Mount Etna it certainly justifies its nickname ‘the Pearl of the Mediterranean’. From Taormina we drive through Mount Etna’s national park to reach the highest point for public vehicles where we take lunch in a mountain trattoria. Etna is one of the most active volcanos in the world and it was the legendary home of the Roman fire god, Vulcan, and the mythological one-eyed Cyclops. This afternoon there will time to take a walk on the lava.

Taormina with Mount Etna in the background

Day Six – Sunday 20th September
Free day. You may choose to relax at the campsite, swim in the sea or take a walk along the coast.

Day Eight – Tuesday 22nd September
A full-day guided excursion to Noto and Syracuse. Noto is an attractive little town full of gold-coloured stone buildings with fantastical facades and despite being small achieves UNESCO world heritage status. Syracuse on the other hand is much bigger, has a magnificent archaeological zone and a beautiful centre built on the island of Ortigia. We have lunch included in a local restaurant.

Day Nine – Wednesday 23rd September
A free day, our campsite is right by the beach.

Day Ten – Thursday 24th September
We travel further along the coast today to our campsite in the south of Sicily. 60 miles

Day Eleven – Friday 25th September
A full-day guided excursion to Ragusa and Scicli, two beautiful towns featured in the Inspector Montalbano TV series and yet to be discovered by mass tourism. A light lunch is included for today.

Day Twelve – Saturday 26th September
A free day to enjoy the campsite surroundings and nearby coast.

Day Thirteen – Sunday 27th September
We leave the coast for a few days to explore some of the island’s interior and stay at an Agriturismo (working farm) which has partly diversified into tourism. This evening we have dinner in the Agriturismo restaurant. 70 miles

Day Fourteen – Monday 28th September
We start today with time in the town of Caltagirone, the home and centre of Sicily’s ceramic industry. Following a light lunch in a local restaurant we visit Villa Romana del Casale, the site of Sicily’s finest Roman remains. Built between 310 and 340 AD this UNESCO World Heritage site is famous for the richness & quality of the mosaics that decorate almost every room, and are regarded as the finest in situ anywhere in the Roman world.

Day Fifteen – Tuesday 29th September
We have a simple Italian breakfast prepared for us this morning on the terrace overlooking the vines of our Agriturismo, followed by the remainder of the day to relax and do very little in beautiful rural surroundings.

Day Sixteen – Wednesday 30th September
Return to the coast and our next campsite situated in the ‘Valley of Temples’. 90 miles

Day Seventeen – Thursday 1st October
A guided excursion in the extraordinary Valley of the Temples. This UNESCO World Heritage site is one of Europe’s most significant legacies of Ancient Greece. You will see the ruins of the many temples, necropolis, houses and streets. There is also a fine archaeological museum.

Day Eighteen – Friday 2nd October
A free morning. At lunch time we wander to the coast for a long leisurely lunch.

Day Nineteen – Saturday 3rd October
We continue round the coast to arrive at Selinunte, a small pocket of Greece at the time Sicily was under North African control. 90 miles 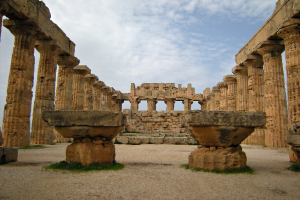 Day Twenty-one – Monday 5th October
Continuing around the island we drive along the ‘North African’ coast, gaining its name by being geographically closer to Africa than mainland Italy. We overnight in a restaurant carpark (no camper facilities so an opportunity to use your motorhome’s own) and have dinner in the restaurant enjoying great views across the salt pans and ‘North African’ Coast.  80 miles

Day Twenty-two – Tuesday 6th October
We continue our journey along the coast to our next campsite located on the picturesque peninsular of San Vito lo Capo. 50 miles

Day Twenty-six – Saturday 10th October
A guided excursion of Palermo with street food light lunch included. With its central location in the Mediterranean the city has a long and colourful history. Its various rulers, the Phoenicians, the Carthaginians, the Greeks, the Romans, and the Saracen Arabs have all left an influence making this bustling city what it is today.

Day Twenty-eight – Monday 12th October
A trip to the popular seaside resort of Cefalù situated on a rocky headland projecting into the Tyrrhenian Sea. It has a lovely beach and a picturesque harbour as well as a Cathedral in the Sicilian Romanesque style dating from 1131. Other sites you can see are a Saracen wash-house and the medieval Osterio Magno, traditionally thought to be the palace of Roger II, Sicily’s 12th Century Norman King.

Day Twenty-nine – Tuesday 13th October
According to legend Bacchus was the god who brought wine to Sicily. Legend aside, there is evidence that wine has been made here for millennia. In the more recent past most of Sicily’s grape harvest was exported to wine producers in other parts of Italy, but in the last twenty years there have been major changes to the island’s wine culture and a new generation of local producers are now consistently winning international acclaim. Today we visit one of Sicily’s wineries for a tour and tasting of some of the excellent wines the country now produces.

Day Thirty – Wednesday 14th October
A free day before we have our ‘Farewell Dinner’ this evening and a chance to recall the many places and experiences we have encountered throughout the tour.

Day Thirty-one – Thursday 15th October
A relaxing start to the day after last night. Late afternoon we travel to Palermo to board our overnight ferry from Sicily to Northern Italy. 40 miles

Day Thirty-two – Friday 16th October
Upon departing our ferry this evening our tour comes to an end. You may make your own way back to the UK or if our Tour Directors are returning to the UK you may travel back with them (campsite and any other fees not included from this point).

This tour starts near Rome in Italy, but if you would like to travel there at the same time as the Tour Directors please book the optional tour package so that everything can be arranged on your behalf