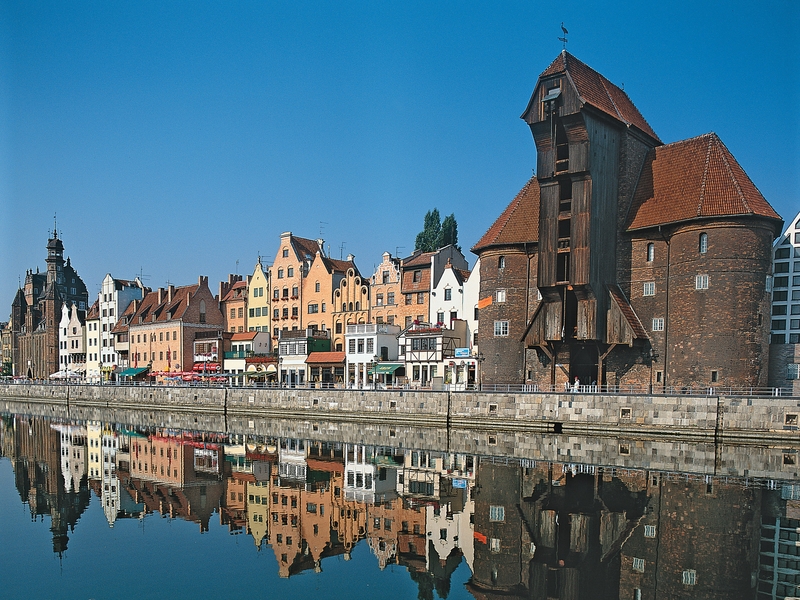 From its majestic mountain ranges and stunning rivers to Warsaw’s urban pulse and Gdansk’s stately maritime heritage, not forgetting its delicious food and tasty beer, often overlooked Poland really does have something for everyone. Our tour begins in the university city of Poznań where a collage of architectural styles, cobblestones and colourful burgher houses awaits you. From here we travel to Wroclaw, now part of Poland it’s a city shaped by a chequered history of previous Bohemia, Hungary, Austrian, Prussian and German occupation. Next to Krakow to discover Poland’s second largest city. Traditionally the home of the Polish monarchy, many were crowned and laid to rest in its magnificent Wawel Cathedral. Today Krakow is a thriving city waiting to be discovered. From Krakow we have an excursion to the extraordinary Wieliczka Salt Mines, designated a UNESCO World Heritage site with miles of tunnels richly decorated in salt sculptures and ornamented walls. Also, not far from Krakow is a reminder of Poland’s difficult past when we visit the moving Memorial and Museum of Auschwitz-Birkenau

On to Poland’s capital Warsaw, a phoenix-like city that has seen many wars throughout its long history and was reduced to rubble during World War Two. Today Warsaw has been painstakingly rebuilt into a vibrant city where aristocratic mansions sit alongside graceful Art Nouveau buildings, Soviet socialist realism and contemporary glass skyscrapers. For the final part of our tour we travel to the medieval city of Torun, birthplace and home of astronomer Nicolaus Copernicus, and the cultural melting pot port city of Gdansk for a visit to the extraordinary Elblag to Ostroda Canal.

Having completed the tour, you will understand why Poland really does have something for everyone

‘Well researched tour with nothing too much trouble for the leaders. Interesting mix of visits with excellent guides. The Polish food was plentiful, tasty and well presented’ Barbara & Peter Ball – Poland – June/July 2018

Our first organised tour, from the first we were welcomed by Ron and Sue and gradually met others in the group everyone got on well and Ron and Sue were so helpful all through the tour. We enjoyed the guided tours and saw more than we would by ourselves. We have just had the lovely farewell dinner and booked another tour.’ Gail and Graham Thomas – Poland – June/July 2018

This tour can also be followed with The Baltic States Tour to give a total holiday of 44 nights.

Day One – Wednesday 9th June
We meet at a campsite in Berlin Germany. This evening we will have an informal Drinks Reception, an opportunity for everyone to get together for the first time.

Day Two – Thursday 10th June
Arrive in Poland today at a site in Poznań where we will stay for the next three nights. This evening there will be a group dinner in the campsite restaurant. 150 miles

Day Three – Friday 11th June
Today we will have a guided walking tour. The university city of Poznań is one of the oldest in Poland and occupies a strategic position on the Warta River in west-central Poland. During the 13th century it was the capital city and is now an important centre of trade and industry. Crowded with churches, cobblestones and colourful burgher houses, Poznań’s Old Town is a collage of architectural styles which we will see during the tour. Lunch included in the city.

Day Four – Saturday 12th June
We drive to our next campsite near Wroclaw. 105 miles

Day Five – Sunday 13th June
Wroclaw has been fought over for many centuries. In the 19th century it became part of the German Empire and its name was Germanized to Breslau. In the 1930s it became one of the strongest support bases for the Nazis who won control of the city by a massive majority in the elections of 1932. It became part of Poland at the end of World War Two and reverted to its original name of Wroclaw. Today it is a unique European city of mixed heritage and was the 2016 European City of Culture. Today we will have a guided walking tour with lunch included.

Day Six – Monday 14th June
A drive today to our campsite near Krakow, we will stay here for five nights. 165 miles

Day Seven – Tuesday 15th June
There has been a human settlement on the site of what is now Krakow since at least 200,000 BC and by 965 it was regarded as the bustling trade centre of Slavonic Europe. For centuries, it was the traditional home of the Polish monarchy, many of whom were crowned and buried in the magnificent Wawel Cathedral. Today it is Poland’s second city and vies with Warsaw for cultural supremacy. We will have a city tour and lunch.

Day Eight – Wednesday 16th June
There will be an excursion to the Memorial and Museum of Auschwitz-Birkenau. The memorial and museum occupy two parts of the network of concentration and extermination camps built and operated by the Third Reich in Polish areas annexed by Nazi Germany during World War Two – this can be a moving experience

Day Nine – Thursday 17th June
Free day today. For those who would like to return to Krakow for more sightseeing/shopping there is a bus stop just outside the campsite

Day Ten – Friday 18th June
An excursion to the remarkable Wieliczka Salt Mines. The mines have been worked for 900 years, producing 200 kilometres of passageways and 2,040 caverns, many with underground lakes and chapels. However, it is perhaps, the sculptures and ornamentation carved into the crystalline salt that make the mines so unique and have won its designation as a UNESCO World Heritage site. The tour route is 2.5 kilometres long and there are 400 steps in all but there is a lift to carry visitors back to the surface. Lunch included

Day Eleven – Saturday 19th June
Today we drive to the nation’s capital, our campsite is on the outskirts of Warsaw. 180 miles

Day Twelve – Sunday 20th June
A visit to the city, located astride the River Vistula, Warsaw is a phoenix-like city having survived so many wars through its history. During World War Two it was reduced to rubble but the Old Town has been painstakingly reconstructed to such an extent that it is hard to believe it is only fifty years old. Known as the ‘City of Palaces’ its many aristocratic mansions now sit alongside subtle Art Nouveau buildings, and contemporary glass skyscrapers. Lunch is in a city restaurant.

Day Thirteen – Monday 21st June
We leave Warsaw today and drive to Torun in the north of Poland. 160 miles

Day Fourteen – Tuesday 22nd June
Torun is one of the oldest cities in Poland and is regarded as particularly special because it avoided destruction during World War Two. Its origins date back to the 3rd century when the Teutonic Order of Knights built a castle here. The city has preserved the original medieval street pattern and many outstanding buildings remain from the 14th and 15th Century, including the house of the astronomer, Nicolaus Copernicus, who was born in Torun. We will have a guided tour today with lunch included.

Day Fifteen – Wednesday 23rd June
A free day. In the evening, we will have a group dinner in the campsite restaurant

Day Sixteen – Thursday 24th June
Onto our next campsite in Malbork. 95 miles

Day Seventeen – Friday 25th June
We will take a trip to Malbork Castle, one of the mightiest fortresses of medieval Europe. Building began in the 13th century and was expanded considerably when Malbork became the capital of the Teutonic Order of Knights. The red brick walls of the Middle and High Castles are surrounded by defensive walls interspersed with towers and gates. The Castle’s enormous size can best be appreciated from the banks of the Nogat River. The Museum inside offers many attractions including several displays of ancient armaments, amber, porcelain and handicrafts. Lunch included within Castle Grounds.

Day Eighteen – Saturday 26th June
Today we will visit the extraordinary Elblag to Ostroda Canal, named as one of the ‘Seven Wonders of Poland’ and a protected Historic Monument. The canal was built in the 19th century to carry trading barges from Lake Druzno to Lake Jeziorak, a distance of 80.5 kilometres. The water level changes by 100 metres in between, too steep for conventional locks to cope with. The problem was overcome by an ingenious system of slipways bordered by parallel rail tracks upon which the specially built boats were carried over the dry land on trolleys. Lunch included in an Elblag restaurant

Day Nineteen – Sunday 27th June
We move on to our site to the south of the ship-building city of Gdansk, our last destination of the tour. We shall stay here for three nights. 40 miles

Day Twenty – Monday 28th June
On the Baltic coast, the one thousand-year old city of Gdansk, or Danzig in its Germanized form, was, and remains, Poland’s principal seaport. Located close to the medieval boundary between Slavic and German held lands the city was a melting pot of both cultures and diverse ethnic groups. It is the influence of this blend of cultures and people that gives Gdansk its unique feel.

It was here on the 1st September 1939 at 4.30 in the morning that the first shot of World War Two was fired. The Nazi German battleship ‘Schleswig-Holstein’, ostensibly on a goodwill visit, sailed up the Vistula and fired at point blank range on the Westerplatte Garrison buildings. It was here too that the Trade Union movement, Solidarity, was formed, an act that triggered the eventual collapse of the Soviet Empire. We will have a guided tour of this fascinating city with lunch included.

Day Twenty-One – Tuesday 29th June
A free day. This evening we will have our Farewell Dinner in Gdansk

Day Twenty-Two – Wednesday 30th June
Our tour ends this morning. Note the Tour Directors will not be returning to the UK at this point

Starting in 4 days and just 150 miles from the end of the Poland tour is The Baltic States Tour. If you would like to follow on from this tour to extend your holiday and to see more of Eastern Europe, you may wish to also make a booking for The Baltic States.

This tour starts in Berlin Germany, but if you would like to travel on the outward journey at the same time as the Tour Directors, please book the optional tour package so that everything can be arranged on your behalf